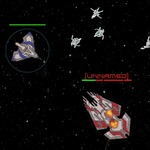 War in Space is another fun multiplayer arena abcya game, just like Slither and Agar. In this abcya3 game you fly around in space while trying to kill other players.

Warin.space is a space themed battleship game that pits you against enemy fleets for control of the galaxy. Unlike other io games that promote individual skill war in space focusing on encouraging team play, because of this you need to remember that numbers win here and excellent teamwork is the way to be successful!

In this .io style game you control a spaceship which you use to farm, upgrade, evolve, and kill enemy spaceships. As previously mentioned it is a team abcya online game so if your team doesn’t work together it will be pretty difficult to win. Once your team starts to get an edge over the your opponents, you’ll want to organise an assault on the enemy base and destroy it. When playing Warin.space just remember power in numbers, with that in mind you also have the ability to single-handedly dismantle a team if you are able to catch a stray ship and slowly take apart their main fleet.

Instruction: Drag your mouse to move and click the left mouse to shoot.